How To Differentiate Chatbot From Practical AI | G&G Technologies 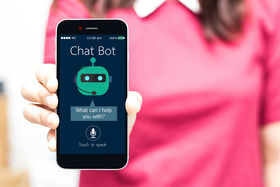 “The machines are taking over!” For years, humans have been fascinated and repulsed in equal measure by artificial intelligence, or AI. Hollywood has capitalized on this intrigue by making movies showing the general devastation that might occur if machines were indeed allowed too much freedom and intelligence.

This glorified representation of AI in movies can be defined as “Hollywood AI,” as machines achieve either human or superhuman intelligence and become a threat to the very people that created them. It’s a theme that’s been around for several years. Think about “The Terminator,” “I, Robot,” “Westworld” and “Ex Machina” – the list goes on.

However, because of the extraordinary ideas put forth by science-fiction movies, many people don’t have a clear understanding of what AI actually is, and view all its forms as threatening. In this case, “The machines are taking over our jobs!” can often be heard from AI critics. Certain programs are also misclassified as AI, the most glaring example being chatbots.

Most people have had some interaction with a chatbot; typically a “live chat” on a company’s website. However, chatbots are unable to learn or adapt, meaning that they have a predetermined list of responses they can use based on what keywords appear in the customer’s question.

While this is useful, it can also be incredibly frustrating, because nuance is a large part of understanding what exactly a person is asking. A human is usually able to pick up on this; a chatbot cannot. In this way, chatbots are not true AI. They are not intelligent, capable of learning, nor able to formulate answers on their own. The more complex a question is, the less effective chatbots are at answering them. They will still only pick up on a keyword and regurgitate an answer based on that – even if the answer has nothing to do with the customer’s question.

Unfortunately, chatbots are often marketed as AI, which leads to immense confusion for businesses. The reality is that while chatbots have a place in the marketplace (for rudimentary questions), it’s a mistake to confuse them with true AI, because the more complex a query becomes, the less successful a chatbot is.

Additionally, because of chatbots’ inability to learn over time, the bot won’t learn from its mistake and do better next time. Instead, it will continue to offer the same responses, until a human adds more sophisticated answers to its list on the back end.

As mentioned above, chatbots are successful only when a query or request is straightforward. For example: “I want extra bacon on my pizza.” When there is complexity involved, “The item I purchased arrived damaged. I’d like to exchange it, and I have already tried to get in touch via phone, but I haven’t had any luck,” a chatbot cannot change its answers based on that complexity – it’s still only able to give general answers based on keywords in the question. This is often information the customer already knows, leading to customer frustration – the exact opposite of what businesses strive for.

Chatbots have inherent rules in their system, as a linguist has pre-scripted them to understand certain words, patterns and synonyms. When a word or phrase is recognized, the chatbot gives the predetermined answer that fits. Unfortunately, the answer often does not fit with what the customer is trying to achieve.

Practical AI, on the other hand, utilizes the best of human intelligence and artificial intelligence to provide answers that help customers.

Practical AI: What is it and why it isn’t a threat

Practical AI falls in the middle of the spectrum – between chatbots on the lower end and Hollywood AI on the upper end. Practical AI combines humans and AI, providing solutions to critical business problems, such as customer service.

Practical AI is a great step up from chatbots, which are often more of a nuisance to customers than an aid. Machine learning and human intelligence come together to create cohesive, well-rounded teams that can tackle any question, no matter how complex.

It happens like this: A customer asks a question using the live chat option on the website, the AI generates an answer, and before it is sent back to the customer, a human agent approves, rejects or changes the response to ensure it fits exactly what the customer needs. Not only does this improve the customer’s experience with the business, the AI algorithm also learns from the agent’s interaction, improving its response accuracy the next time someone asks a similar question.

Conversational process automation takes this one step further, and resolves the incoming query end-to-end, including in a company’s back-end systems, without agent involvement.

So, why isn’t it a threat to customer service agents’ jobs? Well, the AI can perform the mundane, repetitive tasks in the process like finding the general information that fits the question, and the human agent then tweaks the response to add that human element, in which nuance, subtlety and the customer’s true objective are understood properly. Or, in the case of conversational process automation, resolves it entirely.

By taking care of the repetitive, and often most costly tasks, the AI frees up the human agent’s time to perform tasks that are more stimulating and interesting. In this way, AI isn’t stealing jobs instead, it is allowing humans more time to focus on the tasks that excite and motivate them. Thus, humans and AI have a symbiotic relationship, in which the AI is able to learn from humans, and where humans can give more attention to more complex tasks.

How does AI learn?

Machine learning now involves the use of neural networks. Neural networks, in theory, mimic the neurons in the human brain, enabling the AI to learn as a human being does. The algorithms are fed large amounts of information, including inputs and outputs. The inputs, in this case, are customer questions, and the outputs are answers to those questions historically given by customer service agents. This information includes emails, chat transcripts and all relevant metadata.

AI improves because of the massive amount of data it collects over time. Additionally, AI is able to learn from the agent’s interactions with it. So if the AI answers a customer’s question incorrectly and the agent fixes the response to better fit what the customer needs, the AI can learn from this and will do better the next time it’s presented with a similar question. Over time, the AI can give even more accurate answers that require less tweaking from the human agent.

Machine learning has the potential to change traditional customer service models. Chatbots are often ineffective, which can lead to customer frustration and even customer loss.

By incorporating true AI into live chat features, businesses will be able to combine human intelligence with machine intelligence, satisfying customers instead of infuriating them.

At G&G Technologies, we have the best team for your chatbot solutions. Whether it is an ecommerce website or an app, our experts will provide you with the best output based on the requirements set by you.